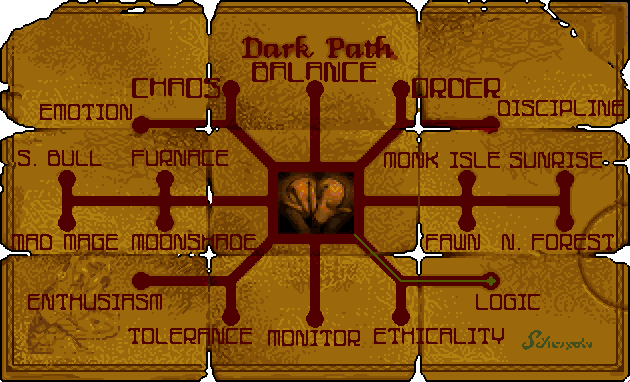 The Dark Path is a huge network of interconnected passages that reside in the Ethereal Void, also known as the Vortex, is an all-encompassing celestial structure within which the cosmos is bound. She has been a major presence throughout the Ultima series, enveloping her many worlds and dimensions and drawing tremendous power from each one's life forces. Superficially, it is perhaps best described as being similar to outer space, but entirely habitable to life forms. A higher plane of existence, the Void cannot be reached by physical travel; it is imbued with magic and accessible only by such means. However, a number of artificial beings, objects and constructs find their place in this astral domain.

It was built by the Hierophants under the leadership of the three Serpents to facilitate quick and convenient travel between the various Shrines and temples on Serpent Isle. Combined with a Serpent Jawbone, you can use one of the many Serpent Gates to teleport to the center of these passages. Historically each tooth in the jaw bone allowed admission to a particular Serpent Gate on the Dark Path, which in turn led back to its corresponding location on Serpent Isle itself.
The Dungeon in was modified by Batlin after he came back to life and re-enacted the Banes of Chaos at this particular time of the year to allow him defense and time to regain his power. By collapsing the bridges that connected some of the rooms of the Dark Path he managed to make it a real fortress, he reached this ancient place through the Serpent Gate evoked by himself in Umbra, which became the only way to reach the dark path .

The History Of Batlin

Batlin was one of the main enemies of the Avatar, is a druid with remarkable magical powers and the main servant of the Guardian on Britannia. Born in Yew and raised with the Druids. As a young man, he began traveling around the country, meeting Elisabeth and Abraham. Around that time he went to Skara Brae and asked Caine for the answers to life and death. When Batlin learned that there were none, he concluded: "No meaning! No virtues! No value !!!" That was the beginning of his darkness. Contacted by the Guardian shortly thereafter, he, Elizabeth and Abraham created the Fellowship in their hunger for power, to allow the Guardian to conquer the lands of Britannia. Before the Avatar even arrived in Britannia, Batlin had hired a ship, crew and scholars to go to Serpent Isle, Gwenno was one of the scholars. This crew brought with them a Black Rock Obelisk. After establishing a camp on Serpent Island, Gwenno set out to explore and research the land, the Fellowship had grown considerably and Batlin was a well-known and well-liked man, hiding his evil behind a facade of peace and benevolence. Meanwhile, Batlin had prepared everything for the Guardian's imminent arrival, including regarding the murder of those who opposed the Fellowship, or those who were getting too close to learning the truth behind their plans. When the Avatar sought him out, Batlin tried to persuade him to join them, who having good reasons to approach the organization and investigate further, was allowed to join after performing certain tasks to prove his dignity. One of the tasks was incredibly dangerous and the Avatar risked his life, so he confronted Batlin and forced him to return to Serpent Isle using the Black Gate chamber. After escaping from the Avatar he set out in search of the Blackrock Serpents in order to open the Wall Of Light. He stole one of these from Andral, the sculptor of Monitor and shortly after at the inn of the Sleeping Bull he stole the Serpent Jawbone from Ensorcio, he also acquired the secret of capturing souls in gems (Soul Prisms) from Torrissio. Batlin thus freed the Banes of Chaos from their prisons, hunting them and capturing them thanks to the teachings of Torissio, then captured the Bane of Wantonness, which Gwenno possessed, in the glacial islands, the Bane of Anarchy in the Skullcrusher Mountains and the Bane of Insanity in the Castle of Shamino after the latter fled the frozen islands to possess Cantra. In fact, he was forced to kill Cantra to capture the final Bane. Batlin entered the Great Shrine of the Order with the intention of using the Banes and his Blackrock Serpent to open the Wall Of Light and gain more power than the Guardian. Selina and Batlin's other followers were killed as the Avatar fights to get to the Shrine in time to stop Batlin. Selina was convinced that she and Batlin will rule the worlds together, and upon her death she said she will wait for Batlin in the Void. Batlin opened the Wall Of Light, saying he would enter and become immortal, but was tricked by the Banes, who broke free from their feeble prisons and killed him. The Guardian did not attempt to protect Batlin, as Batlin had explicitly stated that he would only work for himself at this point. Shortly before dying, Batlin asked the Avatar for help and took his last breath.

How Works The Dark Path

Access to the dungeon will be allowed from 12 to 24, after which it will be closed for the rest of the day

After defeating the first boss, the portal to the next room will open and so on

Once you have passed the first room, it will no longer be possible to return to the previous room

In the dungeon there will be no ankhs to scramble, except for the final room

Recall and The Stuck Menu spells are allowed in the dungeon

The use of Teleport and Shadowjump spells is not allowed

Defeating the final boss will take you back to the entrance of the dungeon, to the "Serpent Gate" of Umbra

Each boss will have the opportunity to drop 4 Special Artifacts

Before starting the dungeon you can collect from the Time Lord some objectives to be completed in the dungeon, completing it you will receive a reward at each turn 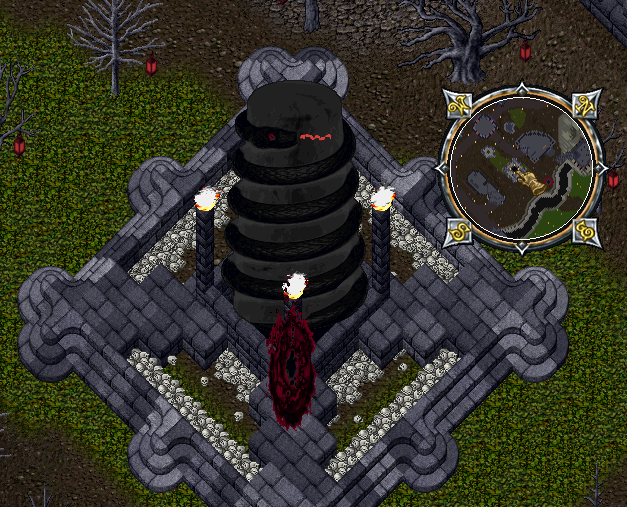 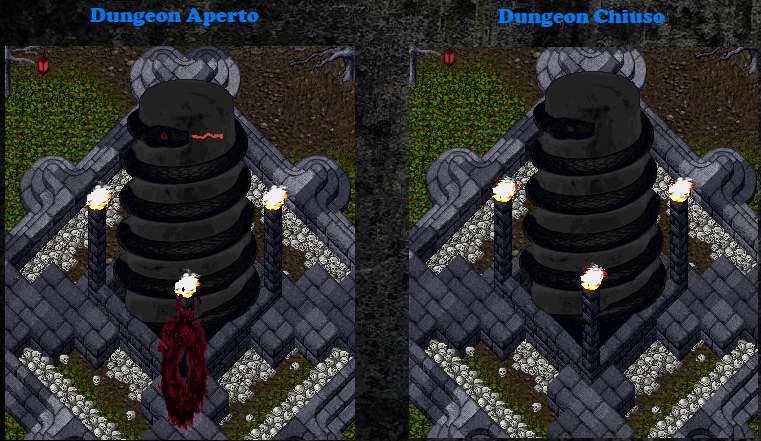 Once you enter the Serpent Gate you will find yourself at the entrance of the Dark Path on the "Ethereal Void", at this point you must use the Dungeon Portal to enter the first room and face the first obstacle. When the bosses of the various rooms die, a portal will open to continue to the next room, reaching the last room where, once Batlin is dead, you will be taken back to Umbra's Serpent Gate!

At the entrance of the Dark Path, before entering the first room you will find the Time Lord who will entrust you with a mission, you can take the Time Lord's mission every time you enter the dungeon, once the Dark Path is completed you can deliver the mission by clicking the "Soul Crystal", if you have completed the requests you will receive the reward. 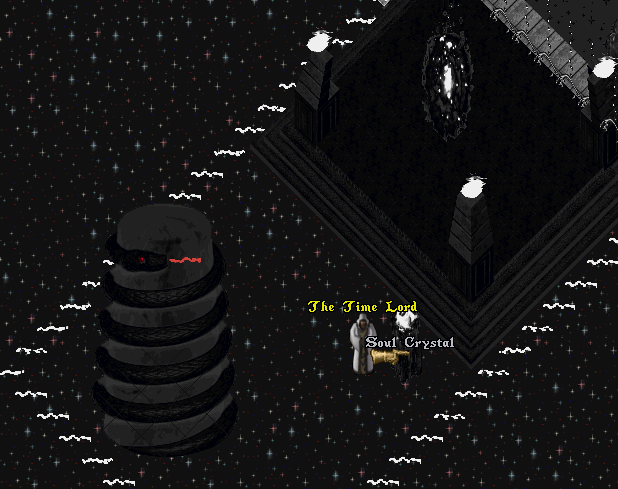 Finally, here are the rooms with their respective Bosses 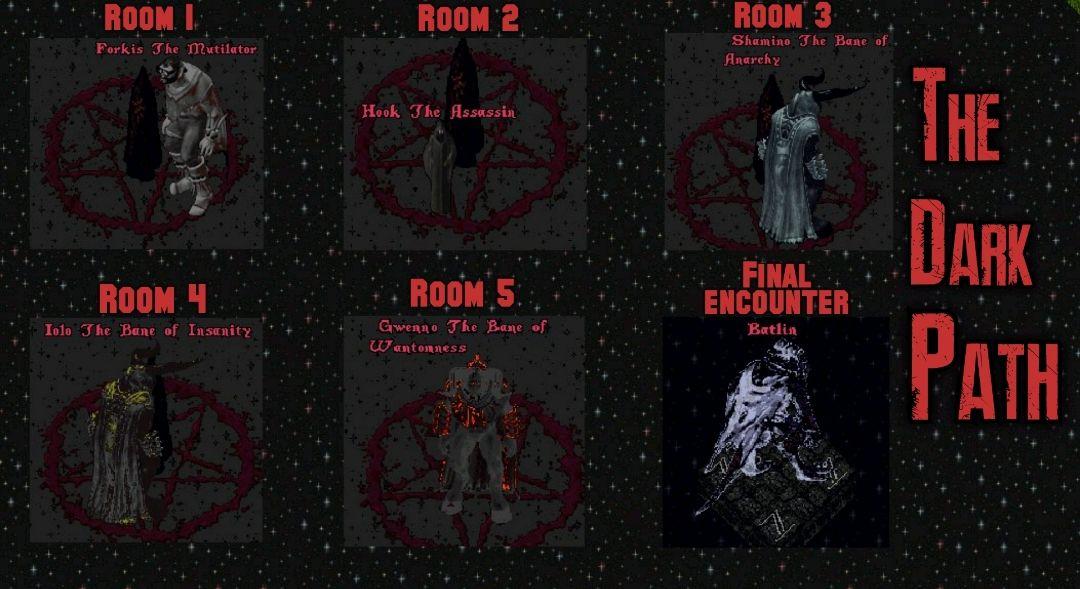 We will find ourselves in front of Forkis The Mutilator, a Gargoyle who was Hook's helper and an evil member of the Fellowship, Forkis thanks to the powers of Batlin has assumed a humanoid form similar to a giant, his strength is unmatched! Once defeated you will proceed to Room 2 using the Room Portal which will open upon his death.

Here we will face Hook The Assassin, an evil pirate also part of the Fellowship, his body has been exhumed and covers his rotten limbs with a cape, despite his body being badly poured out, his strength thanks to Batlin has increased somewhat! By removing it, you will have access to Room 3.

ROOM 3 - Shamino The Bane Of Anarchy

Here we find the Bane Of Anarchy, this being lives thanks to the soul of Shamino, having already taken possession of his body in the past, Batlin has found a way to recall it by exploiting the soul of Shamino himself. Defeating him will give you access to Room 4.

ROOM 4 - Iolo The Bane Of Insanity

Here we will face the second Bane, The Bane Of Insanity that possesses the soul of Iolo. Like the Bane Of Anarchy, it too lives thanks to Batlin's knowledge. By defeating him we will have access to Room 5.

ROOM 5 - Gwenno The Bane Of Wantomness

The last room is defended by the Bane Of Wantomness that always thanks to the knowledge that Batlin has acquired lives through the soul of Gwenno. Defeating him will give you access to Batlin's Palace, which is reached by crossing the Serpent Path above the Ethereal Void.

Batlin thanks to the waves emanating from the Black Gate is slowly regaining power, by killing him we will be able to slow down the enhancement path he is following, Ancient Druid and connoisseur of black magic is a really difficult opponent to face! Once Batlin is killed, the exit gate in the center of the room that teleports to the Serpent Gate of Umbra will open, you can then start the dungeon all over again.

Each boss will have the opportunity to drop one of 4 artifacts, some of which can be dropped in more than one room, here is the drop list: